Sharing Our Faith Together

Worship for the 4th Sunday after Easter

Our first hymn is ‘In Christ alone’

Prayers of Praise and Confession

Our second hymn is ‘Master Speak thy servant heareth’

Now Moses was tending the flock of Jethro his father-in-law, the priest of Midian, and he led the flock to the far side of the wilderness and came to Horeb, the mountain of God. There the angel of the Lord appeared to him in flames of fire from within a bush. Moses saw that though the bush was on fire it did not burn up. So Moses thought, ‘I will go over and see this strange sight – why the bush does not burn up.’ When the Lord saw that he had gone over to look, God called to him from within the bush, ‘Moses! Moses!’ And Moses said, ‘Here I am.’

‘Do not come any closer,’ God said. ‘Take off your sandals, for the place where you are standing is holy ground.’ Then he said, ‘I am the God of your father, the God of Abraham, the God of Isaac and the God of Jacob.’ At this, Moses hid his face, because he was afraid to look at God.

The Lord said, ‘I have indeed seen the misery of my people in Egypt. I have heard them crying out because of their slave drivers, and I am concerned about their suffering. So I have come down to rescue them from the hand of the Egyptians and to bring them up out of that land into a good and spacious land, a land flowing with milk and honey – the home of the Canaanites, Hittites, Amorites, Perizzites, Hivites and Jebusites. And now the cry of the Israelites has reached me, and I have seen the way the Egyptians are oppressing them. So now, go. I am sending you to Pharaoh to bring my people the Israelites out of Egypt.’

Are We Paying Attention?

But are we paying attention to God? We say that with Lockdown we have all this time to do as we like. But how are we using it? Feeling sorry for ourselves? Doing jobs that we finally have time to do? Or perhaps doing a little day dreaming?

I was paying attention to Greg’s sermon of 26th April, where Greg read from Acts 7 part of Stephen’s speech to the Sanhedrin, where he had summarised part of the great deliverance story, of God freeing his people from bondage in Egypt, which included the account of God speaking to Moses from the burning bush.

Moses had fled from Egypt, after he realised that his defence of another Israelite by killing an Egyptian had become known to Pharaoh, and as a consequence his life was in danger. He had escaped to Midian, found a job, got married, had children, and settled down. All was well. But God had other ideas. How was God going to get his attention? He was tending sheep, when he saw a bush that was on fire, not unusual in the scorching heat of that climate, yet it did not burn up, that was strange. So he went over to investigate and take a closer look. At last God had his attention and could speak to him. And in Exodus 3 v10 we read of God commissioning Moses for his task ahead.

Paul was doing God’s work, or so he thought, but in Acts 9 v 1 to 19 we read that on the way to Damascus God struck him blind. At last God had his attention. He spoke to him, and redirected his life.

You see, our God loves to speak to his people. In Isaiah 65 v 24 we read ‘Before they call I will answer, while they are still speaking I will hear’ and in Jeremiah 33 v 2-3 we read ‘This is what the Lord says, he who made the earth, the Lord who formed it and established it - the Lord is his name. Call to me and I will answer you and tell you great and unsearchable things you do not know.’

On occasions God struggles to get our attention. He wants to speak to us, whether it be for the first time, or the umpteenth time. But we are so busy working for Him, we have no time to listen to Him. He may not use a burning bush, he may not strike us blind, but he may use the extra free time we have during ‘lockdown’ to speak to us a fresh.

Let’s make sure that we do not miss the opportunity, to allow Our Father to speak to us during these troubled times. Let’s make sure we are paying Him attention.

We come now again to our Father in prayer. At the beginning of Christian Aid we give thanks for the work that the organisation carries out, pray for wisdom for those that work through the organisation and that their work will continue to be fruitful through these challenging times.

Lord in your mercy, hear our prayer.

I suggest that you use a prayer from those below offered by Christian Aid, followed by the Lord’s Prayer at the bottom of the sheet. 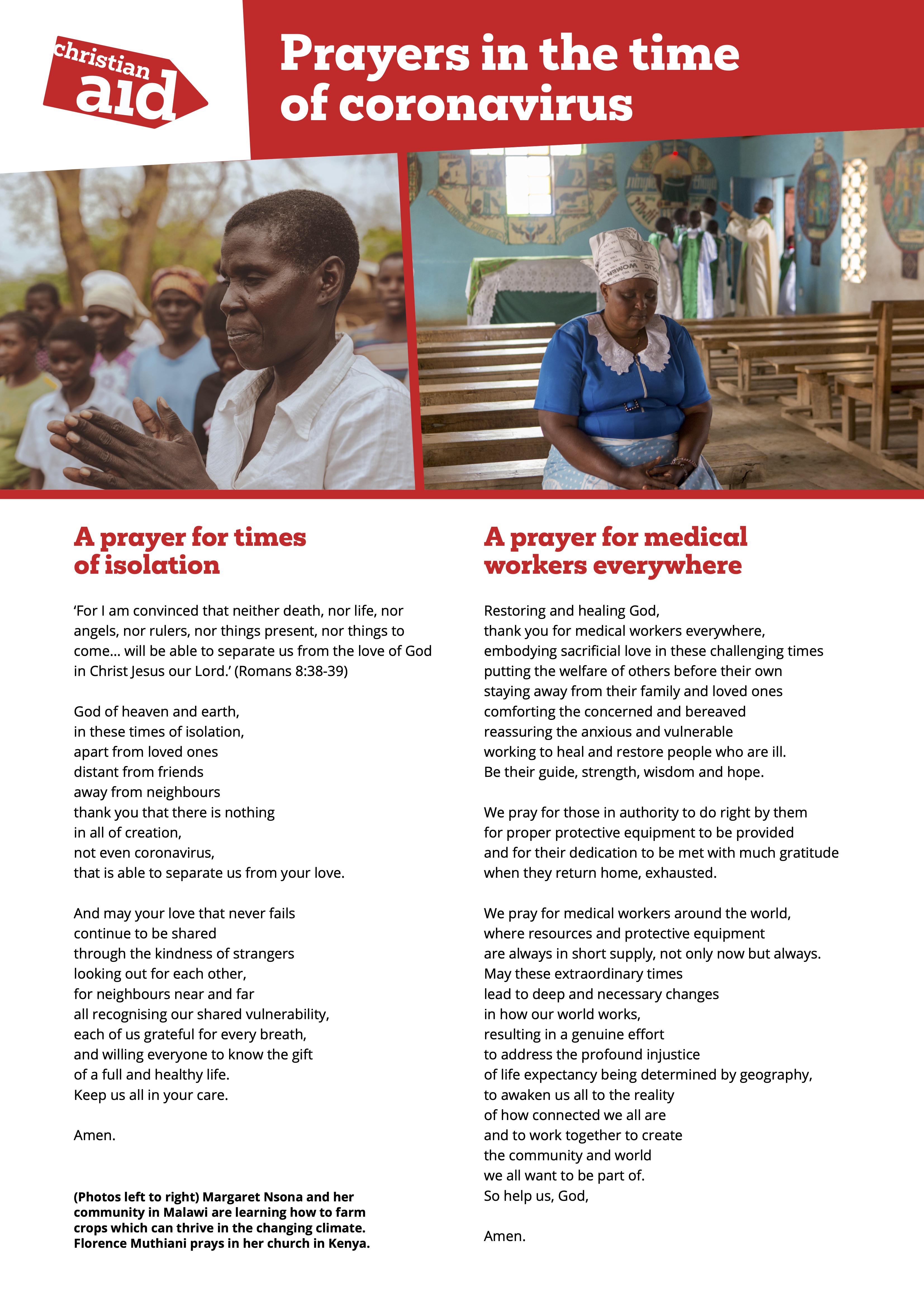 We are united with other churches throughout the country as we share together in the ‘The UK Blessing’.

Next: Minister’s Sermon:Comfort For Troubled Hearts